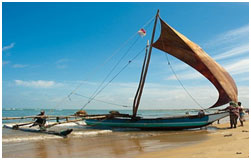 Negombo has been mostly unexplored but less crowded as most tourists use the town for the first or the last night of their stay in Sri Lanka. That is where the advantage where you have the beach mostly to yourself. Nevertheless those who have identified its secrets have been visiting the town year after year. Fine beach stretches are superbly maintained by the hotels while some are always busy with fisherman and their equipment. Equipment for water sports such as diving, wind surfing are available at most hotels and private vendors.

The Pinnawela Elephant Orphanage, established in 1975, commenced with seven orphans. Today some of these orphans enjoy the fortune of seeing their grandchildren born in the same location. The original objective of establishing the orphanage inclined more towards tourism, but is soon became a conservation and educational centre. With the help of local and foreign elephant experts, Pinnawela started a scientific captive-breeding programme for elephants. The free movement of the herd enhanced the chances for respective individuals of both sexes to get together and mate. The nearby river played a dominant role in this regard, and in 1984, the first baby of Pinnawela was born. The success story of Pinnawela has drawn the attention of scientists from all over the world. A considerable number of books and research articles on Pinnawela have been published in several languages. The members of the Pinnawela herd have been filmed, videoed and photographed thousands of times by professionals.

Minneriya National Park is a national park in North Central Province of Sri Lanka. The area was designated as a national park on 12 August 1997, having been originally declared as a wildlife sanctuary in 1938. The reason for declaring the area as protected is to protect the catchment of Minneriya tank and the wildlife of the surrounding area. The tank is of historical importance, having been built by King Mahasen in third century AD. The park is a dry season feeding ground for the elephant population dwelling in forests of Matale, Polonnaruwa, and Trincomalee districts. Along with Kaudulla and Girithale, Minneriya forms one of the 70 Important Bird Areas (IBAs) of Sri Lanka. The park is situated 182 kilometres (113 miles) from Colombo. 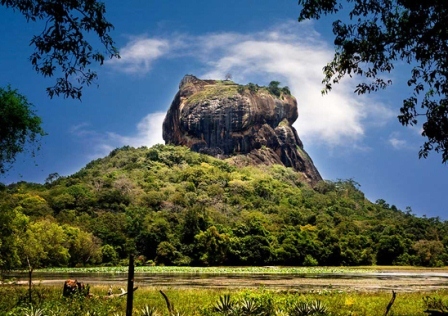 Sigiriya is the story of Sigiriya is one of vision, grandeur, beauty and tragedy unparalleled in Sri Lankan history. Built 1,600 years ago, by a brilliant but tormented king, it burst briefly into pre-eminence with breathtaking architecture and art and then quickly faded away into oblivion and was soon forgotten. Few historic sites in the world have such an interesting tale to tell as that of Sigiriya.It is the tale of King Kasyapa who ruled between 477 and 495AD. A troubled but visionary king; Kasyapa murdered his father by plastering him up in a wall. Rejected by his people for his crime and tormented by guilt and fear he abandoned his magnificent capital of Anuradhapura and fled deep in the forests of central Sri Lanka. There in an area dominated by a menacing black column of rock 600 feet high he built himself a new capital resplendent with lush gardens, palaces and pavilions.He transformed the sinister-looking black rock to appear like a huge dazzling white cloud and painted it with beautiful frescoes of semi-naked nymphs. He build a massive gatehouse in the form of a lion to guard the entrance to the inmost sanctum of his city; the Sky Palace on top of the rock.Hidden from view and surrounded by his courtiers and harem, Kasyapa lived in splendid isolation. He was, however, deeply troubled by his responsibility on the death of his father and lived in guilt and fear. He carried out many good works and observed his religious duties diligently hoping, no doubt, to find some salvation for his troubled conscience.Finally, betrayed, by those he trusted, he committed suicide.

Kandy was Last ruled by King Sri WickramaRajasinghe - before it was brought under the British rule in 1815, Kandy - the World Heritage Site & last royal capital of Sri Lankan kings - crafts an array of culture, history and heritage in the minds of visitors across the globe. A stroll across this small lakeside town - cradled among the misty hills. will feature the Kandy City Centre - bundled with latest and world class brands, bazaar, an arts & crafts centre, as well as a gem museum & lapidary. Drive towards Victoria Golf Course, undoubtedly one of the best golf courses in the world for a sweep blended with class and style. Or walk in color as you glide through fresh fruits and vegetables in the Kandy market. Fine tube your evening by stepping to the beat of traditional music & drumming amplified by a cultural show enhancing the rich and vibrant culture of the Wonder of Asia, Sri Lanka. 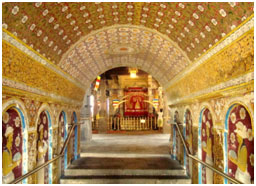 Peradeniya Royal Botanical Gardens, the finest of its kind in Asia, the largest of the botanical gardens of Sri Lanka, couldn't be better located. In the Mediterranean climate of Kandy, the gateway to the Central Highlands, the Gardens, at an elevation of 500 meters above sea-level, were tightly bounded on three sides by a loop of River Mahaweli (Great sandy river), the largest river of Sri Lanka.