Sigiriya Rock Fortress, the plan of the city is based on a precise square module. The layout extends outwards from co-ordinates at the center of the palace complex at the summit, with the eastern and western axis directly aligned to it. The water garden moats and ramparts are based on an 'echo plan' duplicating the layout and design on either side. This city still displays its skeletal layout and its significant features. 3 km from east to west and 1 km from north to south it displays the grandeur and complexity of urban-planning in 5th century Sri Lanka.

Anuradapura is regarded as Sri Lanka’s first known kingdom and the capital of the island for many centuries. Declared by the UNESCO as a world heritage city, Being well known for its cultural and religious value the city attracts many local and foreign visitors who love to explore the ancient history of Sri Lanka. Among the many attractions in the city are the Dagabas, tanks, wild life, art and architecture which are highly respected for their religious and cultural value. The civilization which developed through Anuradhapura is woven round the tanks, the dagabas and temples 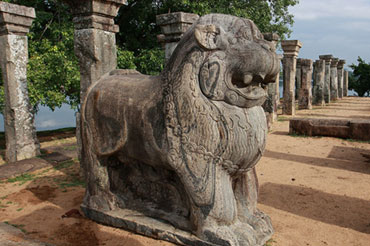 Polonnaruwa, Sri Lanka's splendid medieval capital was established as the first city of the land in the 11th Century, A.D. It replaced Anuradhapura, plundered made desolate, and laid hopelessly bare to the invading armies from South India. Three Kings dominate the annals of the city and the period. The city reached a dazzling but pitifully brief zenith in the 12th century and though ravaged by invasion in the centuries following, much evidence remains of the old grandeur and glory. The ruins of the ancient city stand on the east shore of a large artificial lake, the Topa Wewa Lake, or Parakrama Samudraya (the Sea of Parakrama), built by King Parakramabahu I (1153-86), whose reign was Polonnaruwa‘s golden age. Within a rectangle of city walls stand palace buildings and clusters of dozens of dagobas, temples and various other religious buildings.A scattering of other historic buildings can be found to the north of the main complex, outside the city walls

Minneriya National Park is located between Habarana and Polonnaruwa is an ideal eco-tourism location in Sri Lanka. Among the 24 species of mammals resident in the park are Elephants, Leopards, Sloth Bear, Spotted Deer, Sambar Deer, Wild Buffalo, Wild Pig, Grey Langers, Purple-faced Leaf Monkey, three species of Mongoose, Porcupine and Indian Pangolin. It is the largest known meeting place of Asian Elephants in the world. During this period herds up to 300 elephants are seen at the 8,890 hectare park within a few square kilometers of the Minneriya Reservoir. Among the nine species of Amphibians at Minneriya National Park are the endemic and endangered Slender Wood Frog and the Common Tree Frog. 25 species of reptiles recorded in the park 8 are endemic including the Red-lipped Lizard. Water and Land Monitors are also seen here. The Mugger Crocodile can be seen near the tank. Many species of fresh water fish are found in the Minneriya reservoir. has recorded over 170 species of birds. From Migrating waders like Woodsand Piper, Common Sandpiper & Kentish Plovers to forest birds like Malabar-pied Hornbills, Rufus Woodpecker 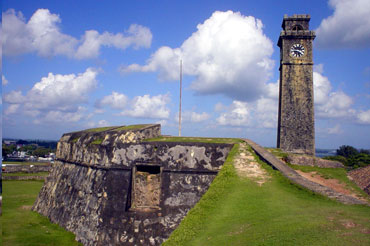 Galle Fort, in the Bay of Galle on the southwest coast of Sri Lanka, was built first in 1588 by the Portuguese, and then extensively fortified by the Dutch during the 17th century from 1649 onwards. It is a historical, archaeological and architectural heritage monument, which even after more than 423 years maintains a polished appearance, due to extensive reconstruction work done by Archaeological Department of Sri Lanka. The fort has a colourful history, and today has a multi-ethnic and multi-religious population. The Sri Lankan government and many Dutch people who still own some of the properties inside the fort are looking at making this one of the modern wonders of the world. The heritage value of the fort has been recognized by the UNESCO and the site has been inscribed as a cultural heritage UNESCO World Heritage Site under criteria iv, for its unique exposition of "an urban ensemble which illustrates the interaction of European architecture and South Asian traditions from the 16th to the 19th centuries."

Galle Town is a charming time locked citadel with glamorous boutique hotels, old world back streets, and an eclectic mix of shops, and cool cafes. The best sand beaches for swimming and water sports are at Unawatuna. There are two lovely spots to sit and sunbathe in relative privacy at Light House Beach down a handful of steps or by the main working Lighthouse in the Fort or Lady Sea Baths, where you will find local women swimming fully dressed due to the predominantly Muslim occupancy of the Fort. Get up early and join the locals on the ramparts for their daily morning exercises and walk round the 36-hectare fort walls, which overlook the sea on one side and the world-famous Galle cricket ground on the other. At Flag Rock between Point Utrecht Bastion and Triton Bastion you will observe local boys freestyle diving off the 13.5m (45ft) ramparts just missing the lethal rocks below, whilst others play cricket, sell Dutch-style lace work, and hand made magic boxes. Top spots include the Historical Mansion Museum (31-39 Leyn Baan Street) with its crazy mix of colonial memorabilia collected by the owner over 40 years and pieces found from shipwrecks. Another highlight is the Dutch Reformed Church (corner of Church and Middle Street) originally built in 1640, and rebuilt in its current form in 1752-55. Inside, the floor of the church is a stunning mosaic of paved Dutch 300 year old tombstones adorned with regal family coats of arms. 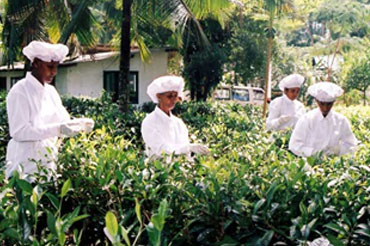 Virgin White Tea Factory is located at Handunugoda, 200 acre property, comprising of Tea, Rubber, Cinnamon, Pepper and Coconut plantations. This Estate is just 15 minutes away from the main tourist resort area of Koggala, in the southern province of Sri Lanka. It may perhaps be the closest tea plantation in the world to the sea. It abounds with a variety of Bird and animal life. The conditions are almost like a Rainforest. The peacock, monkey, porcupine and the mouse deer can be seen if the Visitor is lucky and picks the correct time. You are welcome at any time between 8 AM and 6 PM. You are kindly requested to leave behind only your footprints. All visitors are treated to a complimentary cup tea and cakes at the plantation bungalow. You can buy your requirements of tea from the array of world famous speciality teas which are laid out for your tasting in the ultra modern tasting salon! There is a well equipped tea and Rubber factory. The tea factory is a living and working Museum. The machines are 150 years old and still working smoothly. The Machinery bears mute testimony to the British skills of engineering. They produce only a small quantity of special teas. The plantation does not use any pesticides or insecticides. Their teas have won international acclaim and awards. The Virgin white tea of Handunugoda, the flagship, was presented by Jane Pettigrew at the World Expo in Las Vegas and won praise and appreciation. In Sri Lanka they won the award by the National Chamber of Exporters as the Best small scale exporter. Three of their teas are in the Superior presentation packs of Sri Lanka’s biggest brand market leader Dilmah. The Anuga Food fair in Cologne Germany adjudged three of our teas presented by Dilmah as the most innovative teas in the world. Their Virgin white Tea is marketed in the worlds most exclusive tea stores-Mariage freres International of Faubourg Saint Honore in Paris.

Galle Fort walks, Expect the unexpected on one of Juliet Coombe’s or Daisy Perry’s eccentric Galle Fort walking tours which take you into a maze of hidden backstreets, revealing secret unknown spots, extravagant 18th century merchant houses complete with ostentatious gold bedrooms, lavish pools and characters akin to Hemmingway. The girls will encourage you to try the local merchant brew of spicy ginger tea, Fort hoppers and tantalizing thambili (king coconut) drinks laced with lime and honey. They are the authors of the book Around the Fort in 80 Lives, a work that documents the lives of the people that make up this fascinating citadel, which they now call home. The tailor-made walks will give you an unforgettable insight into the best-preserved living colonial Fort in Asia.