Arrive Cochin international airport. Our company representative will meet you after clearing all immigration/custom formalities and transfer to hotel.

Check in at hotel.

Morning city tour of Cochin with a local English speaking guide visiting ‘The Jewish Synagogue’ at the heart of what is locally called the Jew Town, ‘The Dutch Palace’ with mural paintings, ‘The St. Francis Church’ the oldest European Church in India and finally to the cochin boast Chinese fishing nets.

The Mattancherry Palace is a Portuguese palace popularly known as the Dutch Palace, in Mattancherry, Kochi, in the Indian state of Kerala features Kerala murals depicting Hindu temple art, portraits and exhibits of the Rajas of Kochi.

The St. Francis Church in Fort Kochi (aka. Fort Cochin), originally built in 1503, is the oldest European church in Indian and has great historical significance as a mute witness to the European colonial struggle in the subcontinent. The Portuguese explorer, Vasco da Gama, died in Kochi in 1524 when he was on his third visit to India. His body was originally buried in this church, but after fourteen years his remains were removed to Lisbon. 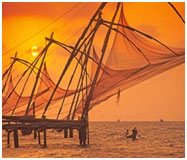 Chinese fishing nets (Cheenavala) are fishing nets that are fixed land installations for fishing. While commonly known as "Chinese fishing nets" in India, the more formal name for such nets is "shore operated lift nets". Huge mechanical contrivances hold out horizontal nets of 20 m or more across. Each structure is at least 10 m high and comprises a cantilever with an outstretched net suspended over the sea and large stones suspended from ropes as counterweights at the other end. 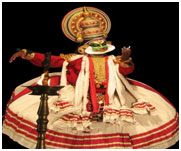 Evening Kathakali Dance Show.Elements of the art of Kathakali are found in the ancient ritual plays of Hindu temples and various dance forms that are believed to have been gradually developed in Kerala from as early as the 2nd Century until the end of the 16th Century. Many of its characteristics are very much older than its literature, as they are a continuation of older traditions, but these did not crystallize until the 17th Century when the Rajah of Kottarakkara, a small principality in central Travancore, wrote plays based on the Hindu epic "Ramayana" in sanskritizedMalayam, which could be understood by ordinary people. Before this, the stories were enacted in pure Sanskrit, which was known only to the learned few.

Morning after breakfast leave Cochin by an air conditioned transport for Periyar.

Arrive Periyar and check in at hotel.

Dinner and overnight stay at hotel

Afternoon visit spice plantation you take a walk along the streets of Kumily or the winding pathways among the plantations, the thing that strikes you first is the lingering aroma in the air. The scent may be of cloves, nutmeg, pepper, cinnamon or cardamom and sometimes a fragrance that combines the scents of two or more spices. The geographical and climatic peculiarities of Kumily such as the cool climate and its elevation from the sea level make it ideal for spicecultivation.

One of the major spices produced in the area is cardamom. The variety, Cardamom Small, botanically known as Elettaria Cardamom, is the one that is mostly grown here. The thick shrub-like cardamom plant usually grows at an altitude of 600 to 1200 metres from mean sea level (msl).

Kerala contributes about 70 percent of the national production of cardamom with the major chunk coming from the plantations of Kumily.

Morning after breakfast leave Periyar for Alleppey jetty and board houseboat.

Lunch, Dinner and overnight on Houseboat.

Morning after breakfast leave houseboat at Alleppey Jetty and drive to Cochin.

Arrive Cochin and transfer to cochinairport to connect flight for back to home.

Below rates are per person in USD on Double Room basis

However above rates do not include:-