Check In at Hotel. 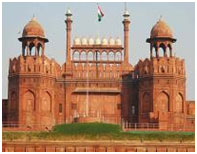 Red Fort (from Outside), Emperor Shah Jahan commissioned construction of the Red Fort in 1638, when he decided to shift his capital from Agra to Delhi. Its design is credited to architect Ustad Ahmad Lahauri, the same architect who constructed the Taj Mahal. The fort lies along the Yamuna River, which fed the moats surrounding most of the walls. Construction began in the sacred month of Muharram, on 13 May 1638. Supervised by Shah Jahan, it was completed in 1648. Unlike other Mughal forts, the Red Fort's boundary walls are asymmetrical to contain the older Salimgarh Fort. 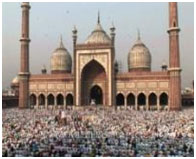 Jama Masjid one of the largest mosques in India, The Masjid-i Jahān-Numā the 'World- reflecting Mosque'), commonly known as the Jama Masjid Delhi, is the principal mosque of Old Delhi. Commissioned by the Mughal Emperor Shah Jahan, it is the best-known mosque in India. Construction began in 1650 and was completed in 1656. It lies at the beginning of the Chawri Bazar Road, a very busy central street of Old Delhi. The later name, Jama Masjid, refers to the weekly Friday noon Congregation prayers of Muslims. Also drive past ChandniChowk, shopping centre of Old Delhi followed by Rickshaw Ride.

Chandni Chowk originally meaning "moonlit square" or "moonlit market", is one of the oldest and busiest markets in Old Delhi, now in central north Delhi, India. Built in the 17th century by the Mughal emperor of India Shah Jahan, and designed by his daughter JahanAra, the market was once divided by canals (now closed) to reflect moonlight, and it remains one of India's largest wholesale markets

QutubMinar built by Qutub-ud-Din Aibek in 1199,it is the 2nd tallest minar (73 metres) in India after FatejBuri in Chapparchiri at Mohali which stands 100 meters tall. QutbMinar originally is a UNESCO World Heritage Site. QutbMinar is made of red sandstone and marble. The stairs of the tower has 379 steps, is 72.5 metres (237.8 ft) high, and has a base diameter of 14.3 metres, which narrows to 2.7 metres at the top. Construction was started in 1192 by Qutb – ud –din Aibak and was carried on by his successor, Iltumish In 1368,Firoz Shah Tughlag constructed the fifth and the last storey.

Humayun’s Tomb:- Humayun's tomb is the tomb of the Mughal Emperor Humayun in Delhi, India. The 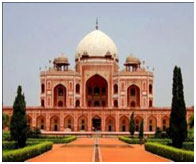 tomb was commissioned by Humayun's first wife Bega Begum (Haji Begum) in 1569-70, and designed by MirakMirzaGhiyas, a Persian architect chosen by Bega Begum. It was the first garden-tomb on the Indian subcontinent, and is located in Nizamuddin East, Delhi, India, close to the Dina-panah citadel also known as PuranaQila (Old Fort), that Humayun founded in 1533. It was also the first structure to use red sandstone at such a scale. The tomb was declared a UNESCO World Heritage Site in 1993, and since then has undergone extensive restoration work, which is complete. Besides the main tomb enclosure of Humayun, several smaller monuments dot the pathway leading up to it, from the main entrance in the West, including one that even pre-dates the main tomb itself, by twenty years; it is the tomb complex of Isa Khan Niyazi, an Afghan noble in Sher Shah Suri's court of the Suri dynasty, who fought against the Mughals, constructed in 1547 CE. 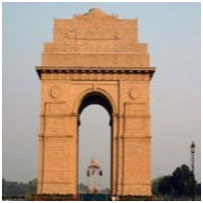 India Gate :- The India Gate, originally called the All India War Memorial, is a war memorial located astride the Rajpath, on the eastern edge of the ‘ceremonial axis’ of New Delhi, formerly called Kingsway. India gate is a memorial to 82,000 soldiers of the undivided Indian Army who died in the period 1914–21 in the First World War, in France, Flanders, Mesopotamia, Persia, East Africa, Gallipoli and elsewhere in the Near and the Far East, and the Third Anglo-Afghan War. 13,300 servicemen's names, including some soldiers and officers from the United Kingdom, are inscribed on the gate. The India Gate, even though a war memorial, evokes the architectural style of the triumphal arch like the Arch of Constantine, outside the Colosseum in Rome, and is often compared to the Arc de Triomphe in Paris, and the Gateway of India in Bombay. It was designed by Sir Edwin Lutyens.

Drive Past to President House and Parliament House

After breakfast at hotel, drive to Jaipur
Arrive Jaipur and check In at Hotel.
Rest of the day at leisure. 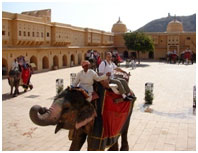 Morning after breakfast Proceed for a half day excursion to inspiring Amber Fort, 11 Kms form Jaipur. Amber Fort is a marvellous example of Rajput architecture with its terraces and ramparts reflected in the Maota Lake below. Go up the fort in a jeep. The interiors of the fort have various royal halls decorated with intricate ivory, mirror and glass work complemented by exquisite wall paintings. As you move between the rooms of this magnificent structure feel the history and visualise the pomp and grandeur of a kingdom never conquered

(Elephant rides at Amber Fort cannot be guaranteed in advance. This is due to the fact that the number of Elephants and the trips each Elephant can take is limited. All guests have to reach the Amber Fort in time and stand in line to wait their turn to climb the Elephant. These lines could sometimes be very long and some guests have had to be turned back).

City Palace Museum where you can see an imposing blend of traditional Rajasthani and Mughal Art, The museum is resplendent with its collection of robes of royal princes, carpets, an armoury of old weapons, miniature paintings portraying court scenes, battle scenes and processions, The City Palace Complex gives you an idea about the farsightedness of the founder of Jaipur Sawai Jai Singh. He left behind a legacy of some of the most imposing and magnificent architecture, art and craft structure in the city. Sawai Jai Singh built its many buildings but some of some of the structures were also built by later rulers and some of them are even dated in the in the twentieth century too. The palace is a blend of Mughal and Rajasthani architecture and the royal family still lives in a part of the palace.

The Jantar Mantar is a collection of architectural astronomical instruments, built by Sawai Jai Singh who was a Mughal Commander and served Emperor Aurangzeb and later Mughals. The title of (King) and Sawai was bestowed on him by Emperor Mohammad Shah. Jai Singh II of Amber built his new capital of Jaipur between 1727 and 1734. It is also located in Ujjain and Mathura.

The Hawa Mahal (The Palace of winds), which adjoins the famous City Palace wall, was built in 1799 by Maharaja SawaiPratap Singh and has now become one of the major landmarks of Jaipur. The palace is shaped like a pyramid and is a five-storied building, with number of small windows and screens, with arched roofs.

Fatehpur Sikri is a city and a municipal board in Agra district in thestate of Uttar Pradesh, India. The city was founded in 1569 by the Mughal emperor Akbar, and served as the capital of the Mughal Empire from 1571 to 1585. After his military victories over Chittor and Ranthambore, Akbar decided to shift his capital from Agra to a new location 23 miles (37 km) W.S.W on the Sikri ridge, to honor the Sufi saint Salim Chishti. Here he commenced the construction of a planned walled city which took the next fifteen years in planning and construction of a series of royal palaces, harem, courts, a mosque, private quarters and other utility buildings.He named the city, Fatehabad, with Fateh, a word of Arabic origin in Persian, meaning "victorious." it was later called Fatehpur Sikri. It is at Fatehpur Sikri that the legends of Akbar and his famed courtiers, the nine jewels or Navaratnas, were born. Fatehpur Sikri is one of the best preserved collections of Indian Mughal architecture in India

Arrive Agra & check in at hotel

Taj Mahal from Persian and Arabic, “crown of palaces", pronounced is a white marble mausoleum located in Agra, Uttar Pradesh, India.Commissioned in 1632 by the Mughal emperor Shah Jahan to house the tomb of his third wife, Mumtaz Mahal, the Taj Mahal stands on the southern bank of the Yamuna River. The mausoleum is widely recognized as "the jewel of Muslim art in India" and remains as one of the world’s most celebrated structures and a symbol of India’s rich history.

Return to hotel for breakfast

The present-day structure was built by the Mughals, though a fort had stood there since at least the 11th century. Agra Fort was originally a brick fort known as Badalgarh, held by Raja Badal Singh Hindu Sikarwar Rajput king (c. 1475). It was mentioned for the first time in 1080 AD when a Ghaznavide force captured it. Sikandar Lodi (1488–1517) was the first Sultan of Delhi who shifted to Agra and lived in the fort. He governed the country from here and Agra assumed the importance of the second capital. He died in the fort at 1517 and his son, Ibrahim Lodi, held it for nine years until he was defeated and killed at Panipat in 1526. Several palaces, wells and a mosque were built by him in the fort during his period.Hemu who won Agra in 1553 and again 1556 defeating Akbar's armyAfter the First Battle of Panipat in 1526, Mughals captured the fort and seized a vast treasure, including the diamond later known as the Koh-i-Noor. The victorious Babur stayed in the fort in the palace of Ibrahim and built a baoli (step well) in it. The emperor Humayun was crowned here in 1530. Humayun was defeated at Bilgram in 1540 by Sher Shah. The fort remained with Suris till 1555, when Humanyun recaptured it. The Hindu king Hem Chandra Vikramaditya, also called 'Hemu', defeated Humanyun's army, led by Iskandar Khan Uzbek, and won Agra.

In time transfer to Delhi International airport to connect flight for back to home.

NOTE – THE MENTIONED DRIVING TIMES ARE APPROX AND BASED ON NORMAL TRAFFIC CONDITIONS, HOWEVER THE SAME MAY CHANGE/DIFFER DUE TO HEAVY TRAFFIC / JAM ON THE ROADS

Based on above program our net rates work out as under:-

However above rates do not include:-